It has been said that the best Nintendo is weird Nintendo. This is epitomized by Sushi Striker: The Way of Sushido, a recently released puzzle/Pokemon/fighting game hybrid centered around eating mass quantities of sushi. Over the course of about 20 hours and 150 levels, I fell in love with the absurd, yet surprisingly deep and challenging anime adventure the game took me on. Instead of spending a post singing its many over-the-top praises, I thought I’d provide tips on maximizing your sushi striking abilities for anyone seeking to start their own sushi revolution. 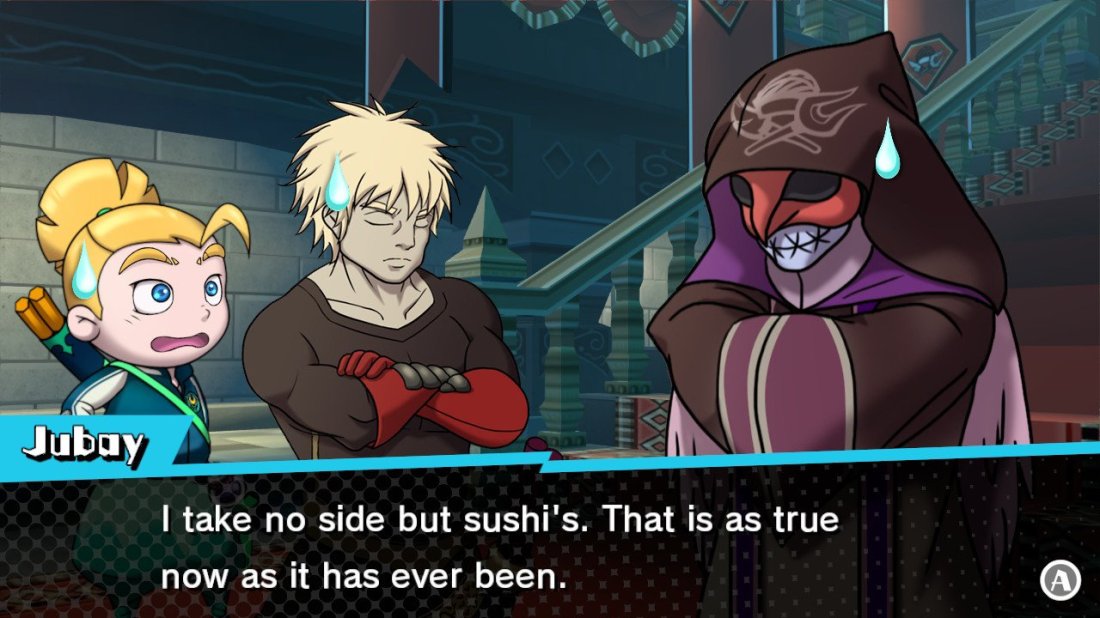 So How do I Play Exactly?

The main concept behind the game is actually fairly simple. You chain up like-colored plates by eating the sushi on top of them. You then throw these stacks of plates to attack your opponent. Along the way you’ll be able to alter how you play thanks to Pokemon-like Sushi Sprites that determine the particular sushi you receive (where plate color helps distinguish quality which can be thought of as power) and allow you to unleash certain skills once you have eaten enough sushi to power them up. There’s a lot to learn along the way, but the game gives you plenty of time to adapt, which should help ensure you’re never overwhelmed trying to process all the information being thrown at you. 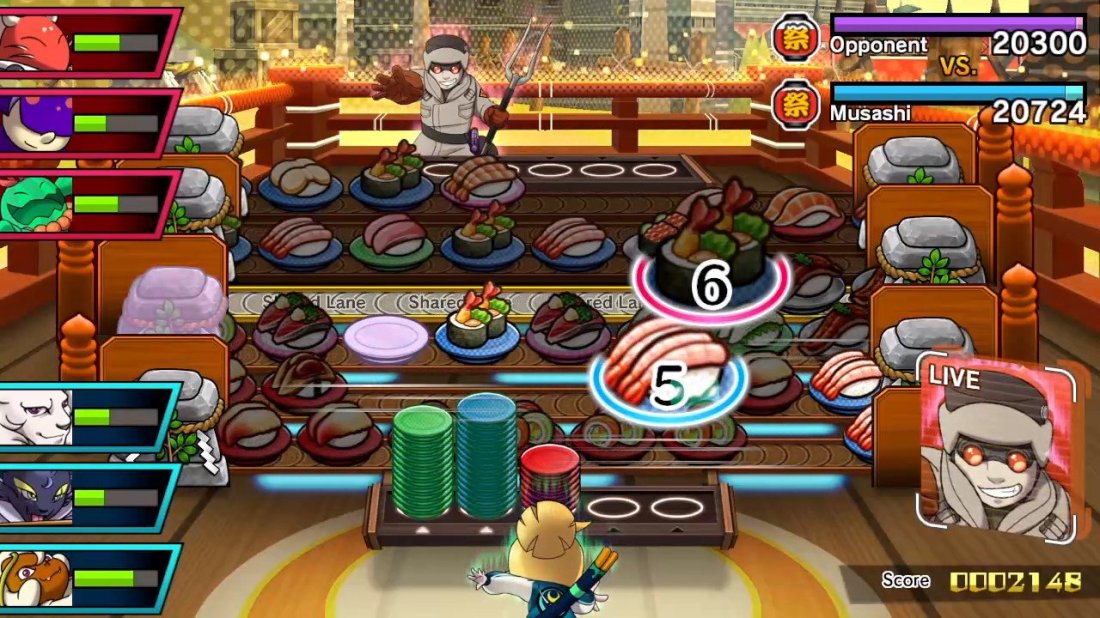 Use the Touchscreen for Almost Everything

First thing’s first. Don’t even try to play this with a pro-controller or Joy-Con. In order to connect plates with the speed required to prevail, your finger is the best bet. Just make sure you set up the screen in such a way that you’re not blocking the view of incoming plates too much.

That being said, there is one place that I found using the controls to be useful. I typically launched plates using the “X” button because this added to the speed at which I could get combos off and prevented a weird issue where sometimes I would find myself selecting a plate from the conveyor belt instead of launching a stack that was ready.

The faster plates go by, the faster you can build stacks. The first few levels will give you a chance to acclimate to things, but as soon as you can, upgrade your lane gear and anything else to make the lanes move more rapidly.

Know When to Give Up on a Chain

Sometimes you might make the wrong call about what color plates to stack together. If you realize there’s a better stack showing up, don’t hesitate to give up and switch directions. Nothing is worse than wasting a bunch of time hoping to add to a failed chain.

Don’t be Afraid to Stock up and use Auto-shoot

About a quarter of the way through the game, I realized I was much better off focusing on building chains than worrying about constantly attacking. Keep an eye out if you have a crappy short stack somewhere near the middle of your table and shoot that off manually, but otherwise feel free to either pile up for a big combo or let things progress naturally with auto-shoot which shoots off the farthest right stack if your table becomes full.

Pick Your Sushi Sprites Based on How They Compliment One Another

There are a huge variety of sushi-sprites that you can choose from to match your preferred play-style. I chose to play with an offense-heavy strategy in mind, so I settled on Jinrai (Sushi Bonanza), Batten (HP Hunter), and Sun-o (Plate Jumper). By timing their execution well, I could build up massive stacks with Sushi Bonanza and Plate Jumper and use that onslaught to steal a bunch of health back from my opponent thanks to HP Hunter. Even when I was well overmatched, perfectly completing this three stage maneuver had the potential to turn any battle. See the video below for how it worked.

Be Aware of Your Opponent’s Skills

You don’t want to waste when you use your skills, so make sure you know what your opponent is capable of. You can easily lose a match if you mistakenly save up for a big attack only to have your opponent put shields up at the worst possible time. Similarly, in a tight match, you might know it’s time to make your final charge if they’re about to unleash something devastating like electrozap on you. 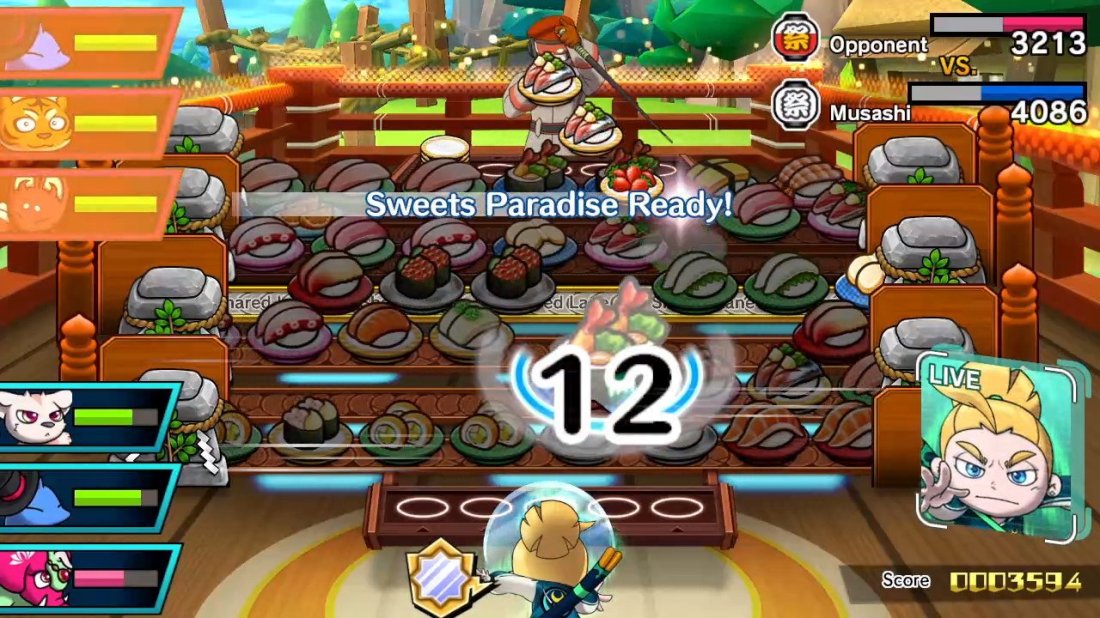 Don’t Worry too Much About Your Favorite Sushi

I quickly lost track of all the possibilities for my favorite sushi that provide fairly minor boosts to you in battle. Typically, I planned my favorite sushi around helping me complete individual level goals where I had to eat a certain amount of them, so I would pick something that was currently showing up frequently based on my sprite load-out.

Go Back and Replay to Grind

Despite its cartoony aesthetic, Sushi Striker is actually very challenging. I found I had the best chance of emerging victorious if I remained ~3 levels ahead of the recommended level for each stage. The easiest way to achieve this was to go back and replay each of the levels after completing a region. Aside from providing much needed experience points, you can focus more on the individual level goals the second time around to help you unlock the hidden areas which lead to valuable sushi sprites.

Lean in to the Ridiculousness

If you’re going to spend 20 hours attempting to learn the ancient art of sushido, then you had better be prepared to fully embrace the preposterous yet incredibly endearing story. See below for a (spoilery, but come on this is telegraphed from the start) video of just what to expect that made me smile so damn wide.

What are you waiting for? Prepare your bellies and get out there to demonstrate your love of sushi and save the world!

One thought on “How to Become a Master Sushi Striker”