Finally, after a mere 59 hours and 32 chapters, my main journey in Octopath Traveler has come to an end. Looking back on my time immersed in this stylish 16-bit throwback adventure, I find there’s both plenty to love and a lot to be frustrated about. As far as scratching that classic JRPG itch, Octopath certainly does that. It’s enjoyable throughout and a solid 8.5/10 or so if you were to grade it. The main problem is that it could have easily been an all-time great game had it tried just a little bit harder.

JRPGs have been known to have some of the best in-game music there is. I still catch myself humming the victory music from Final Fantasy VII and Persona 5 from time to time. Octopath might just set a new high bar for music as each of the eight characters has an instrument dedicated to them, and every story transition/battle flows perfectly with the melody. This is definitely a game to play with either good speakers or a set of headphones to fully lose yourself in.

While Octopath borrows heavily from the classics, it makes sure it stands out with a fantastic battle system that far exceeds the mindless button pressing of the games of yesteryear. Exploiting an opponent’s weakness and earning “Untouchable” or “Domination” scores after fights remains exhilarating throughout. When everything is clicking, it’s almost like you’re planning a well-choreographed dance to knock your opponent down and deliver massive damage. Even in the final chapters (specifically Ophilia’s wonderful final boss), I found myself learning new things about my characters and discovering novel ways to turn the tide in battle.

Despite all the characters borrowing heavily from the archetypes in the games that came before them, I found myself invested in each one and their mainly small scale and often silly stories. While there were clearly favorites (Tressa and Cyrus), I was actually glad to welcome my often benched heroes back into the fold for a chapter or two and see how they switched gameplay up.

Each and every character is distinguished by their unique job’s skill set. I found myself loving all of the jobs and sad that I had to choose just 4 at a time. In a pleasant surprise, about halfway through the game I started uncovering the secondary job shrines, which seemingly opened up an entirely different game. Suddenly I was able to customize my party to shore up any weaknesses or double down on strengths depending on the situation. While my main adventure is over, I do look forward to going back one day and unlocking the 5 ultra powerful secret jobs. 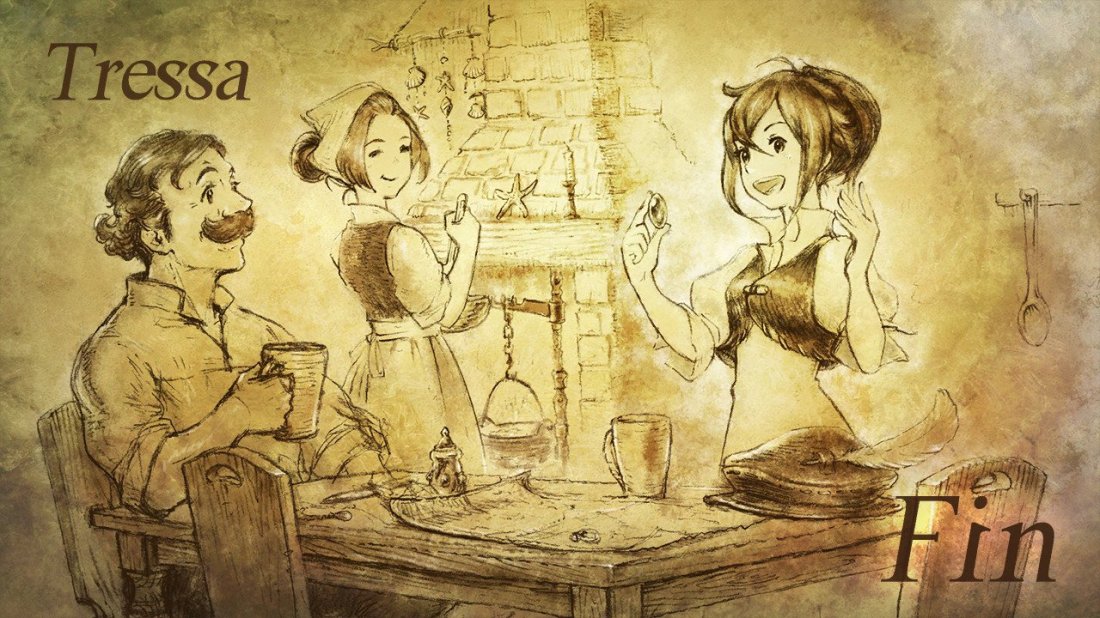 I won’t spoil things too much, but all I have to say is that I absolutely loved how the end credits brilliantly let me relive some of the key moments from my travels. Not only was it a great walk through memory lane, it also helped me realize just how much my strategies changed throughout.

Without a doubt, the most important thing I came across in my travels was being able to use Cyrus’s “Scrutinize” path action on a random good dog at the beach. This alone should be worth at least half a point in any review score.

90% of the time, the unique 2D/3D mix and lighting effects are a pure joy and unlike anything I had played before. Unfortunately, sometimes in cramped dungeons navigation can become a little difficult as some of the depth tricks they use can lead to confusion and running into things.

31 of the 32 chapters are basically identical in structure where you go to a new town, watch some cutscenes, use your path action, travel to a dungeon, and fight a boss. The 1 chapter that you don’t do this (Olberic’s Chapter 2 Tournament) makes this even worse because you see exactly how amazing the game could have been with just a little more variety. Despite the repetitive nature of the chapters, I only really found myself having to push through near the midpoint of the game. As the end came into view I was reinvigorated in my quest.

While there are many negatives to the repetitive structure, it did lead to one huge positive. It made the game perfect for doing small chunks at a time in between other things. I knew if I had 60-90 minutes to spare I could easily knock out another chapter, and I knew exactly what the process would be like. While this made lengthy play-throughs almost impossible, I appreciated being able to mark off another chapter before bed each night. In the several days since finishing the game, I’ve been surprised how much I miss what had become a daily routine.

There’s absolutely nothing new here. Just about every major character arc has been played out in a different JRPG before. That being said, there was still plenty of charm to be had to keep me enjoying things throughout.

One of my favorite things in RPGs is socializing with the random townspeople who can’t join your party. For the most part, Octopath Traveler gives you an amazing number of options concerning how you interact with all the NPCs. From stealing and acquiring to alluring and more, there are plenty of ways to utilize the NPCs to help your cause. Unfortunately, all of these button clicks meant I often skipped out on my favorite part of visiting a new village – simply talking to the people.

Like most JRPGs, there is a ton of grinding you have to do in this game. I was able to minimize this some by only having two main characters I always kept in and rotating in the supporting two each mission. Still, the high level caps and lack of experience earned by members on my bench led to a lot more time fighting the same enemies right outside the next big chapter area than I would have liked. Simply following the current norm and having a skill that shared EXP with non-active members would have easily remedied this. Also, there aren’t a lot of opportunities to earn fast EXP. The boss battles in particular feel like cheats as they last 5 times as long as a normal battle but only earn you slightly more EXP. While I spent ~ 60 hours playing the game, somewhere between 10-15 were dedicated to mindlessly grinding.

The Lack of Interaction

Even after finishing the main game, there is zero reason given to why these very different protagonists are traveling together. Aside from some minor, often boring banter scenes, they hardly interact (and never all interact together at once). Who is in your party has zero impact on the stories which really are just focused on one central character with some essentially mute friends who tagged along.

H’aanit might have been the most distinctive character in the game with her Pokemon like capturing ability, but early on I found myself avoiding her because I couldn’t stand the horrible Old English dialogue she spewed out in a never-ending stream of terrible writing. Amusingly, there are parts where the writers appeared to get lazy and gave up on the gimmick, but those was too infrequent to make a difference.

The Lack of Video Save

Most games on Switch now have the ability to save videos easily by holding the capture button. Sadly, Octopath Traveler does not, which is a real shame because it would have been great to share some videos to really hammer home just how wonderful the battles are.

If after reading my breakdown of Octopath Traveler’s strengths and weaknesses you still decide to embark on this quest, here are a few more tips on party construction that I began in my character selection post 50 or so in-game hours ago.

I initially questioned my decision to have Tressa be my locked in main character, but about midway through my journey, I knew I had made the right call. Tressa is naturally strong in magic, and she unlocks an ability that lets you use only half the normal SP for your skills. Adding the cleric job on top of that allows you to ensure you always have a healer without sacrificing offense at a cheaper cost (thanks to the aforementioned SP halving) than using the actual healers, Ophilia or Alfyn (whose mullet immediately removes him from party contention). Additionally, her “Hired Help” skill gives you access to almost every physical weapon weakness in the game making her useful for just about every battle. Plus she’s adorably the worst capitalist ever.

Aside from being easily my favorite character, Cyrus’ magic represents some of the strongest attacks available in the game (especially once you unlock the double spell ones). Hell, you don’t even need to put a secondary job on him, but it’s nice to have that extra warrior skillset when needed. For an added bonus, make him a merchant for a while until you unlock the previously mentioned skill for Tressa that halves SP use and basically gives you an unlimited supply of magic. In a welcome mercy, when you get tired of grinding, Cyrus has a skill to make your random encounters less frequent.

Thanks to the “Arrowstorm” skill, H’aanit can easily deliver 4-6 arrow hits to rapidly take down a foe with a weakness to bows. Throw in her creature capturing being the most fun mechanic in the game (and useful since it can completely remove an enemy from the battle well before they would die), and that would just about be enough. But pair her with the thief secondary job so that you can utilize “Shackle Foe” and “Armor Corrosive” that affect the attack power and physical defense of your enemies, respectively, to help ensure a victory.

Sure you could pick someone here with 2 completely different skills than the 6 on my core three to make sure you have everything covered, but I found I enjoyed using my final slot to double down on a strength. Olberic came in extremely handy when I knew I needed that raw physical power (and the wonderful “Arrowstorm” from his hunter skillset), while having a secondary scholar in Primrose was the natural way to go when facing more magic-averse creatures.

While Primrose may have the most depressing backstory, she’s also the most useful in helping shorten your grinding time as her “Beguiling Dance” sometimes leads to huge bonuses in experience or job points. Just be careful, because it can also go the other way and cripple your team, so make sure the battle is well in hand before using it (and never, ever use it against a boss).

While this is the team structure I settled on, what’s great is that this might not even come close to what you pick. Mixing and matching secondary jobs can lead to a nearly endless combination of party-types to help you through your journeys and is one of the best things about the game.

I’m curious to see if time looks back fondly on Octopath Traveler as a charming nostalgic adventure or a heavily flawed missed opportunity. While I am extremely glad that I put the time in, your milage may vary depending on just how much you like the genre. Here’s hoping they make a sequel that goes the extra mile.

2 thoughts on “Octopath Traveler: The Good, the Bad, and the JRPG”