The most overwhelming year in recent memory has been kind of an underwhelming one in gaming with an abundance of good games (Ghost of Tsushima, Streets of Rage 4), plenty of masterful remakes/remasters that deal in nostalgia over establishing something revolutionary (Tony Hawk’s Pro Skater 1+2, Super Mario 3D All-Stars, Final Fantasy VII Remake), and a few big shots that just missed out on greatness (sobbing uncontrollably in the general direction of The Last of Us: Part II). While this is to be expected as game companies seem more focused on kicking off the next-gen due in November than making the final year of the current-gen’s dominance all that memorable, it’s still a tad disappointing. Thankfully, the team of superstars at Super Giant games decided to change all that by releasing the first truly remarkable gaming experience of 2020 with their clinic on how to make roguelikes accessible and fun for all known as Hades. In lesser hands, Hades might have just been a slick indie that gets people excited for a week or two and moves out of the collective memory, but under the careful toiling of the creators of two of my personal favorites, Bastion and Pyre, it manages to crack the roguelike code by making death the best part of the game.

There’s plenty to love in the meticulously crafted yet somehow procedurally generated Hades. At its core, it’s all about the silky smooth combat kept fresh by 6 vastly different weapons to choose from and countless boons from the gods of Olympus showering your tools with helpful effects to ensure each run through the underworld as Hades’s rebellious heir Prince Zagreus feels entirely unique. With each weapon possessing 3 forms and each aforementioned boon from the gods altering you or it in some way, there are seemingly millions of variations that each trek through the Underworld can take. As a result, one of the most fun aspects of the Hades zeitgeist has been seeing how seemingly every person gravitates toward an entirely different playstyle. Will you be a traditionalist who lives and dies by the (boring) sword, a deadly assassin taking after your cousin Artemis and picking off foes masterfully with the slow but powerful bow, an agent of Chaos turning a shield into a ricocheting nightmare (note: this is the correct answer), a true heir to Hades by striking with the ultra-balanced spear, a close-quarters speedster a la Hermes picking your spots with the twin fists, or will you try your best to turn the game into Devil May Cry by choosing a gun of all things? If you’re doing it right, each run can be an entirely different method of madness, and boredom will always be far from your mind.

Battling through hordes of undead, though, is secondary to the intricate and beautiful story of family at the core of it all. These escape attempts aren’t just for fun, they’re to try to reach the surface to reunite with the Mother you’ve never met while also learning about your family on Olympus who you’ve been hidden from throughout your life. Each character has a multitude of layers to unravel and a rich history to learn that is still being slow-drip revealed nearly 60 runs deep. 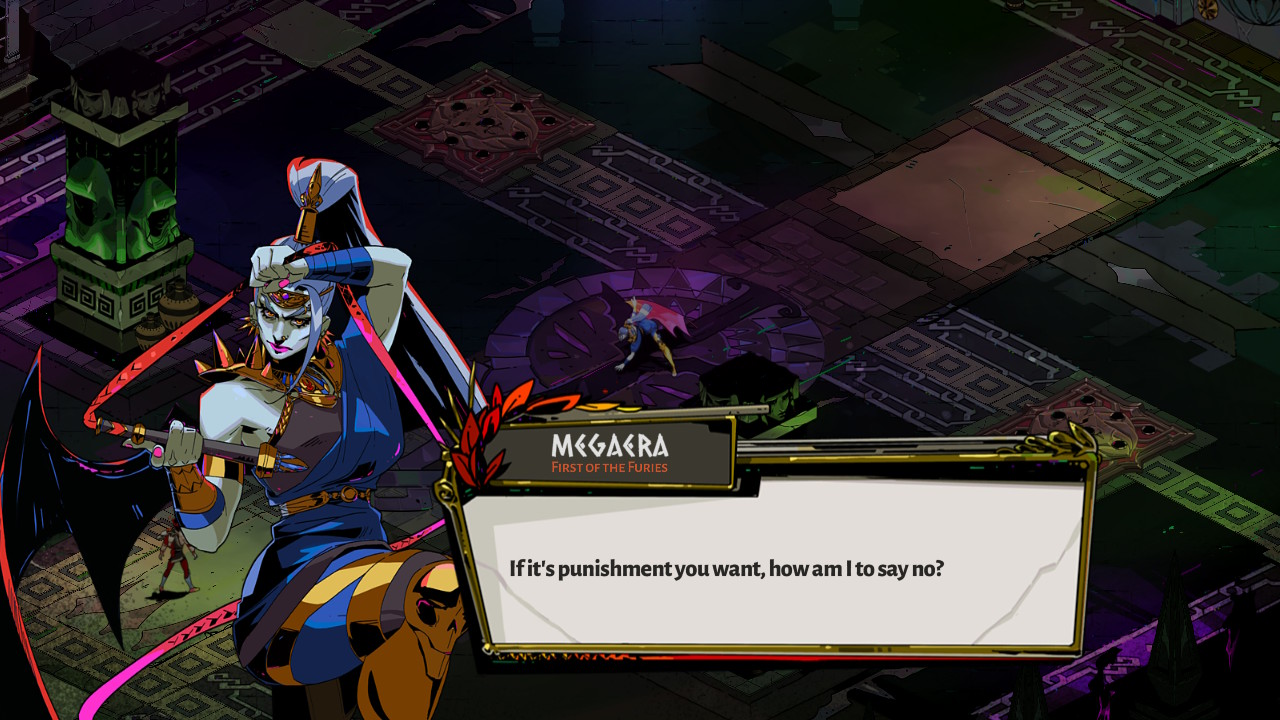 All of these aspects are buoyed to further greatness thanks to death. Death is an often frustrating part of video games. Games like Battletoads and Teenage Mutant Ninja Turtles from the NES era still send chills down gamers spines due to their adoption of the insane difficulties of arcade games that were ratcheted up 50 notches to ensure quarters were eaten gave new meaning to frustration as one wrong move could send you back to the opening level. While the majority of today’s games have embraced death by giving you unlimited lives or making the repeated dying part of the fun (think Dark Souls and Super Meat Boy), one genre of games has continued to proliferate the misery of dying – roguelikes, leading to many finding them to be rather unwelcoming and unforgiving. Often times, roguelike games where death comes easily can become extremely frustrating as you feel like each unsuccessful run is just wasted time as you are forced to start back again from the beginning often with nothing. Hades avoids falling into the trap by including a useful upgrade tree (or mirror, really in this case) that allows you to use the treasures you’ve gathered to make sure your next run is at slightly less of a disadvantage. As with any roguelike there’s a sense of mastering just a little more each time that comes with dying, so it is always fun to jump back in thinking how you might alter your strategy ever so slightly to ensure victory the next time or with a sliver of hope that the random boon drops will be more in your favor. 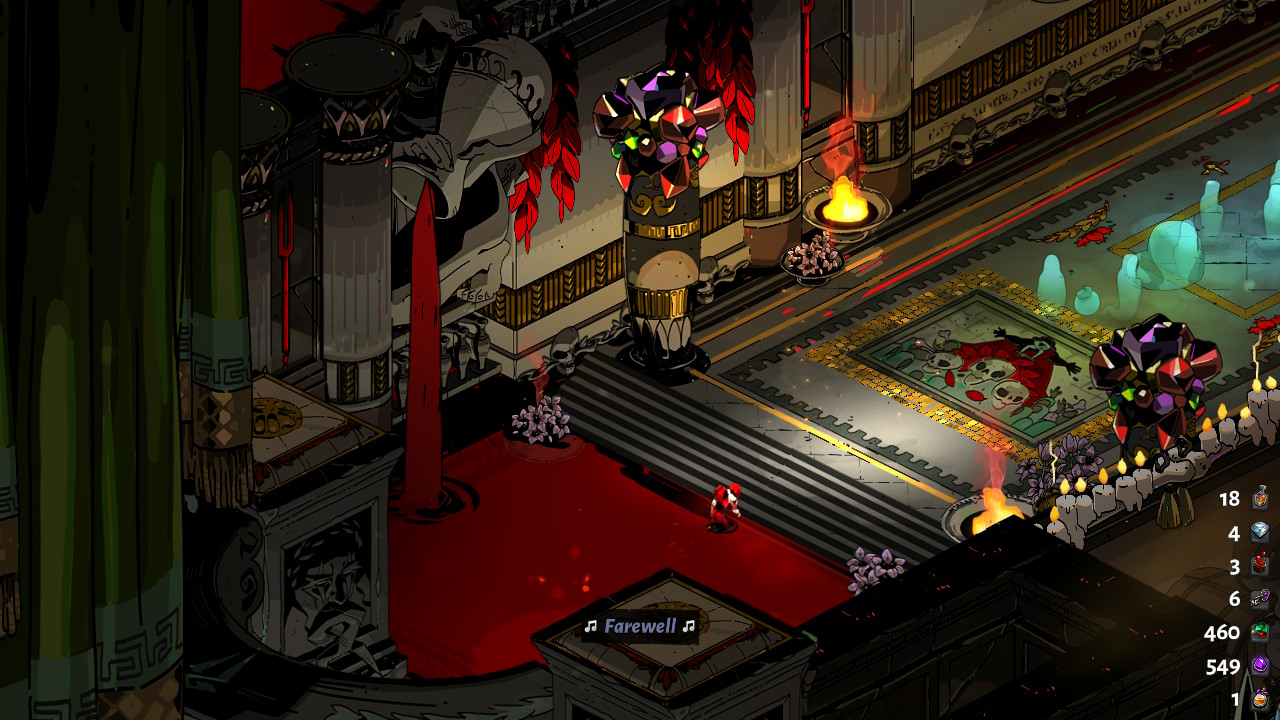 Really, though, I love dying in Hades because it gives me a fresh chance at advancing the story. I can’t wait to reappear through the River Styx into the House of Hades and see what new tidbits of prophecy or character details all the house companions have to offer. I know Achilles will be there to discuss more weapon skills or his tragic past, Dusa will be around to act starstruck that the prince of the Underworld is talking to her, the fury Meg will send a mix of hatred and flirting my way, Hades will find a way to insult me while maybe hinting at love for his son, and the very good boy Cerberus will be ready for a fresh batch of pets. Even now, over 50 runs in, it’s not the final epic battle against Lord Hades that I look the most forward to, it’s the dying and returning to the Underworld that is the main draw. I mean it makes sense given that the entire year has been about trying to escape the inescapable, and, because of that, 2020 has its first masterpiece and the leading contender for Game of the Year.