Despite the evil forces of the bot gods and crashing websites being aligned against me, I managed to score pre-orders for both the PlayStation 5 and Xbox Series S thanks to my impeccable skills at refreshing web pages incessantly. The next-gen is here for me at last, and it’s pretty damn glorious. Fortunately for my general well-being, I do have a wife and kid or else this week off for Thanksgiving where I got to really dive deep into my new beautiful gaming children may have seen me officially become one with my KILLABEE chair. There’s a lot to love about both new consoles, and it’s still far too early to know where they’ll land in the all-time gaming pantheon, so the point of this post is merely to talk about what I’ve noticed about the two machines and not overly compare the two (especially since that’s a more apt exercise for the Xbox Series X).

As an added bonus, I’ve even thrown in some shots from my phone showcasing my professional photography acumen that I was renowned for back in my days of food blogging… 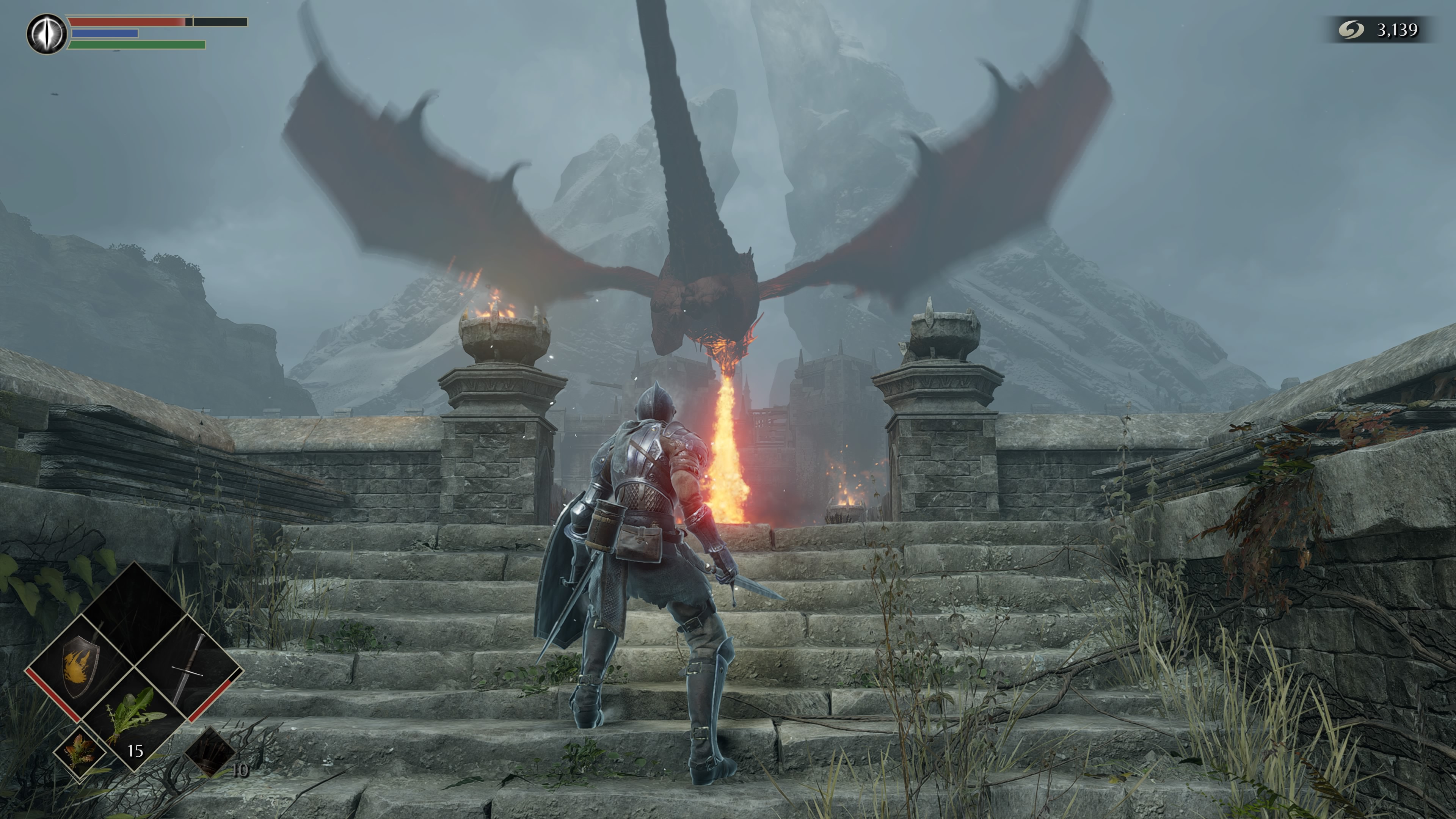 Much like how my PS4 served as the main conduit for playing the newest games and having access to all the great Sony exclusives, I assume my PS5 will function in a similar manner. This is the performance machine I want to really wow me and serve as my primary console. Above all else, it was the one I was most eager to get my hands on.

I kept hearing that this was a massive console, but nothing could quite prepare me for just how big it is. Containing this beast in my “office” and still having room for my actual work stuff required quite a bit of rearranging/cleaning, but, overall, I’m a big fan of the way this thing looks. The odd curvature of the faceplates is sleek and appropriately futuristic looking. Plus, it’s hilarious taking pictures of it next to previous Sony machines (like the PlayStation Classic pictured above). The only downside is the very flimsy and seemingly pointless stand that it comes with, which detaches at even the slightest movement.

This generation of consoles felt like getting a new iPhone. You simply enter your account info and set-up is pretty straightforward and over in a matter of minutes. The PS5 even wisely implores you to insert any game discs while the system is being configured so the game will be ready to play by the time it’s all over. With minimal effort, my new system was linked up to sharing services like Twitter, payment methods, and even my full library of games I had downloaded on my PS4. In under 15 minutes, my PS5 was ready for gaming and not suffering through massive annoying updates like earlier models. 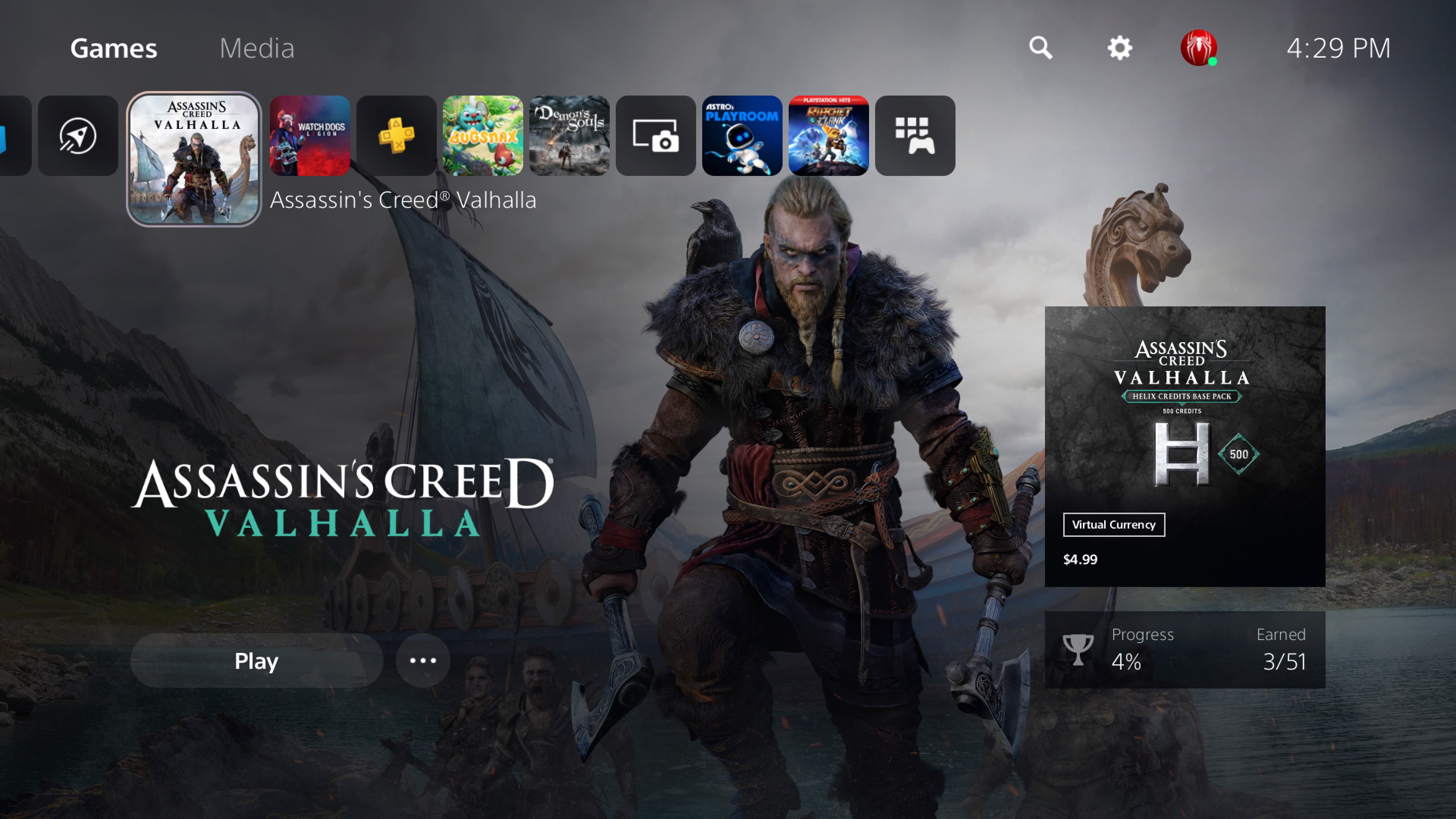 The interface will feel familiar enough to anyone who had a PS4 with a slight shift toward something more akin to Netflix. Games and Media have separate tabs, and there’s a lot of info that can be found including previously unknown playtimes for titles dating back to the PS4. Things don’t feel quite as intuitive as they did for the PS4, but I’m guessing a little more time to adjust to the slight alterations will have navigation feeling like second nature in no time.

Without question, the most next-gen feeling thing about the PS5 is the controller. The advanced haptic feedback and adaptive triggers are leaps and bounds above the simple rumble features we’ve had since the PS1 (listen to this podcast for a great discussion on how they’re different). The system comes with a fantastic pre-loaded game, Astro’s Playroom, that showcases all the wonderful features including, oddly enough, blowing into the controller. At first, I was worried that the controller might just be more gimmick than actual promise, but, so far, the two major titles at release, Spider-Man: Miles Morales and Demon’s Souls, have made smart use of the possibilities and left a lasting impression with things as simple as typing on a keyboard or feeling a constant pulsating heartbeat. I’m very excited to see what devs do with this in the future.

For the most part, the major games available at or near launch can also be found on the PS4 (save Demon’s Souls), so the need to run out and get a PS5 will likely depend on just how much you want to play that Souls remake or if you have a setup that can properly take advantage of the technological improvements. Still, though, there’s plenty to play right off the bat to ensure you can get lots of use out of your shiny new piece of hardware.

Miles Morales is more of 2018’s Spider-Man, and that’s pretty amazing. It’s a much smaller adventure (100%-ed side missions and completed the story in 16 hours), but it’s a worthy addition to one of the best games from the past 5 years. Meanwhile, Demon’s Souls is a fascinating and creepy historical document allowing you to see the early foundation being laid down for the ever-growing Soulsborne genre that is definitely worth visiting for any fan.

All of the glory doesn’t have to go to just the big titles, though, as the previously mentioned pre-loaded Astro’s Playroom is possibly the best pack-in game for a system since Wii Sports and compelled me to get a rare Platinum trophy because it was such a delight. Additionally, the November free game on PS Plus, Bugsnax, is one of the weirdest and most memorable games I’ve played in a while.

Speaking of PS Plus, the PS Plus Collection for PlayStation 5 gives subscribers access to some of the biggest hitters from the PS4 era including God of War, Bloodborne, Uncharted 4, and a whole lot more, making it easy to revisit old favorites or to finally check out games you’ve been on the fence about (I’m looking at you, Days Gone). I’ll be curious to see if they add to the ranks as time goes on, but, regardless of whether or not they do, the PS5 does seem primed to lead this generation in must-play exclusives.

Although I haven’t been able to fully test this sucker yet (my 4K monitor will be arriving circa Christmas), there are several super noticeable improvements over the last-gen. The biggest, most life-changing advancements comes in load times from that lightning fast SSD. Having played the entirety of Miles Morales, I don’t know that I once saw a single load screen. Even fast travel seemed instantaneous. Not all games have this zero load time success, but you won’t find yourself waiting for more than a second or two ever.

Would I Recommend It?

For anyone looking to get the most out of the next-gen, the PlayStation 5 is probably your best bet. While this recommendation is mainly on the promise of what’s to come with exclusives, Sony has the track record to back it up. Still, don’t be distressed if it takes a while to get a hold of one of these because, for the time being, you can still experience nearly all of the same wonderfulness on the PS4 just without the fancy controller, crazy fast load times, and 4K sharpness.

While the majority of people looking to buy a new Xbox will likely have their eyes on the top of the line Series X, I had my heart set on the Series S from the start. My PS5 can handle the big new games for me; I wanted that Series S to serve as a Game Pass machine and give me access to the two previous generations of Xbox since the 360 is one of my favorite consoles ever and I skipped out on the Xbox One.

I absolutely love how the little baby Xbox looks. It’s crazy tiny and could pass for a speaker or a large book. A+ to whoever designed this.

In what felt like the most futuristic setup ever, Microsoft had me configure my new console entirely from my phone! Despite not having logged into an Xbox since the 360 days probably 5ish years ago, I was quickly reconnected to my old Xbox Live account, subscribed to Game Pass and ready to go. 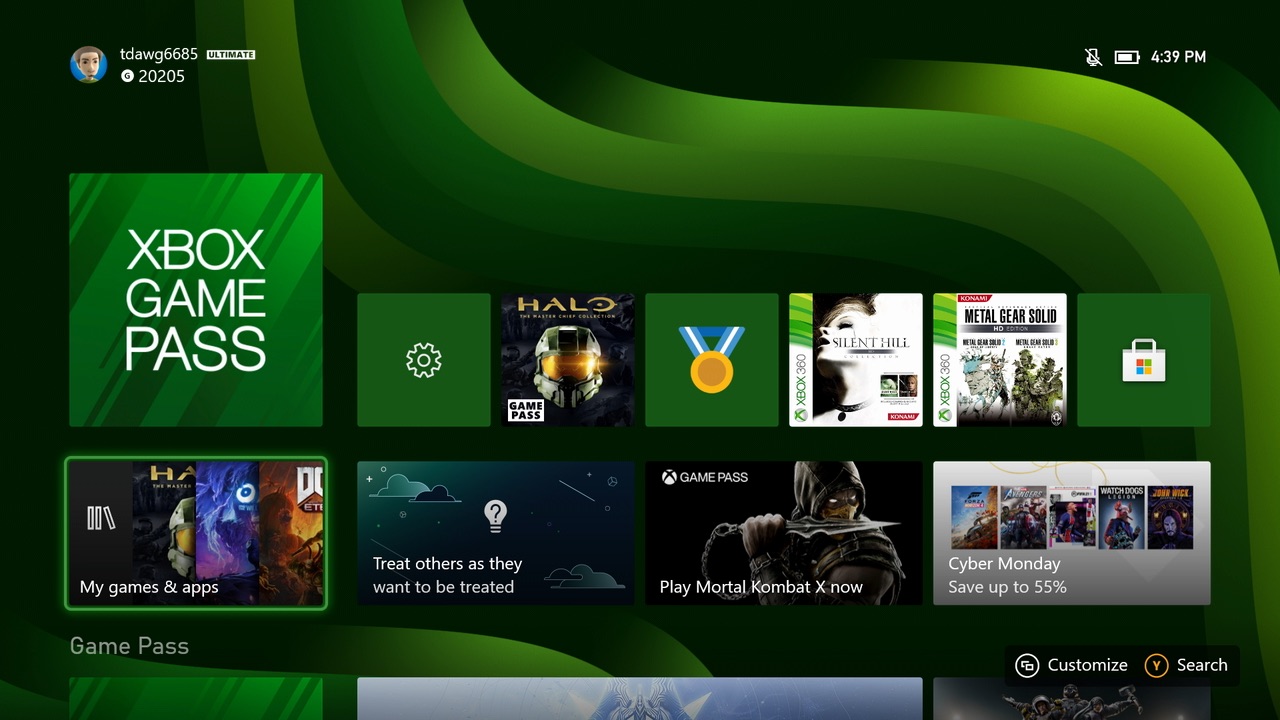 Apparently this is the same UI as the Xbox One, so it should feel incredibly familiar to anyone who owned one. Currently, it comes off as a little overly cluttered to me, but it does seem to offer quite a bit of customization allowing you to tailor it to to needs. Still, there’s quick access to all my games and the Game Pass lineup right from the start, and games clearly display if they’ve been optimized for the X/S generation in their thumbnail. My only major complaint, though, is the hidden nature of the media library to edit and view all my screenshots and game videos. 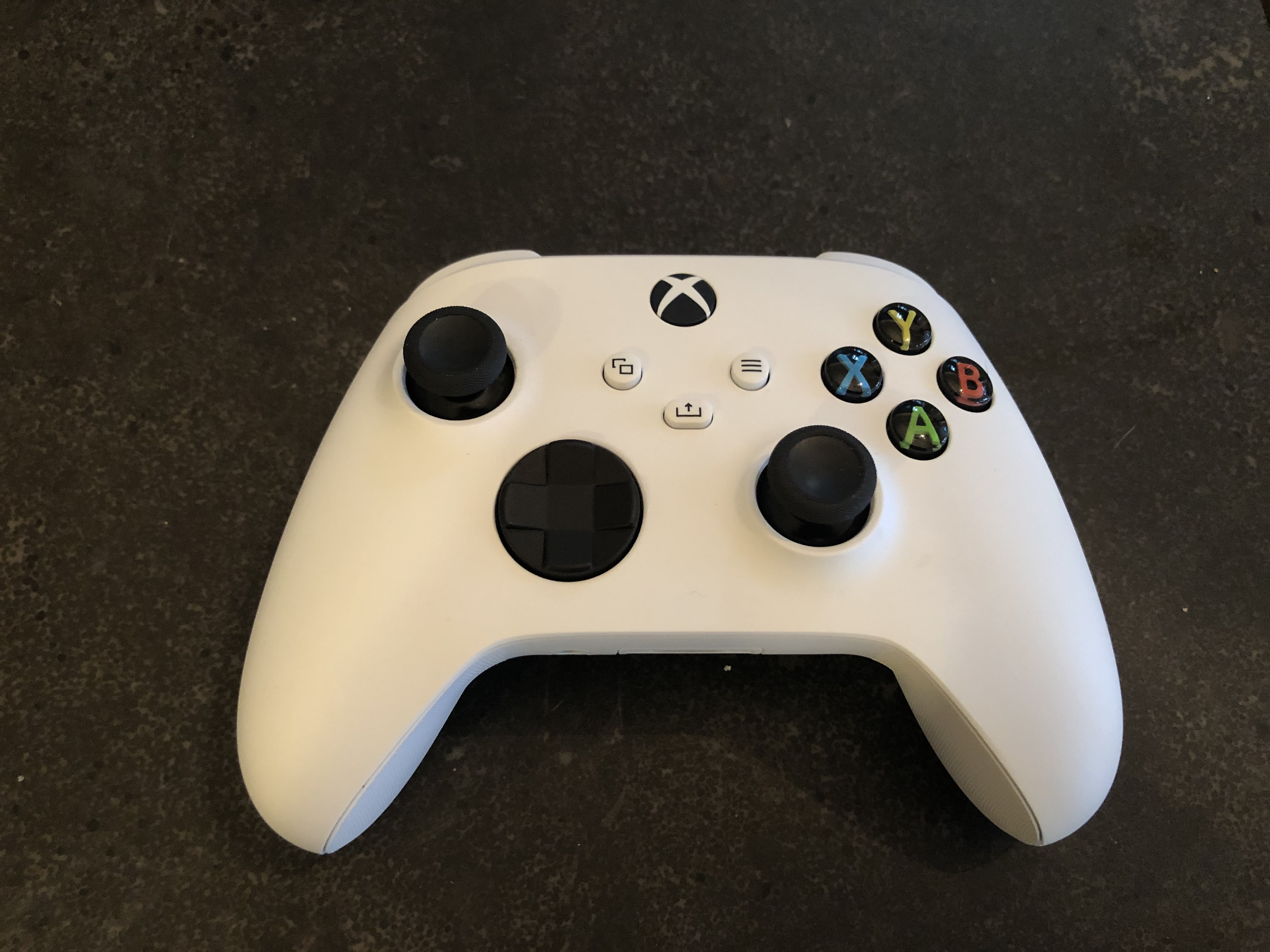 This is yet another Xbox controller, which isn’t a bad thing since the Xbox 360 controller was approaching perfection, but it’s not anything overly new (aside from an added share button). It feels sturdier to hold than the PlayStation controller, but, unlike Sony’s version, this one isn’t rechargeable and requires two AA batteries, which feels like something they should’ve done away with several generations ago. 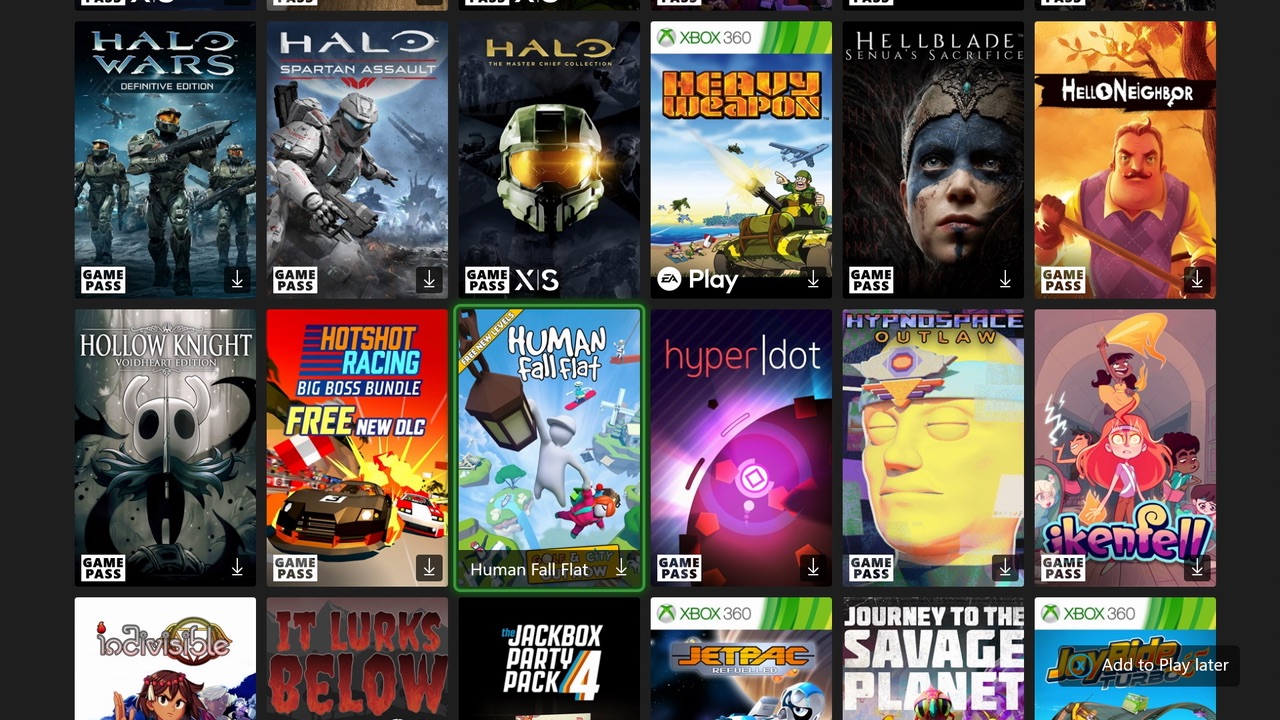 Game Pass, the Netflix like service featuring over 100 titles for a low monthly subscription fee of $10-15, is even more beautiful than I imagined. Within minutes of starting my membership, I had already put 4 games to download and added 10 more to my play later list. These games range all the way back to the Xbox 360 days (yay finally replaying Gears of War) through the Xbox One and into day of releases for Microsoft first-party games, which will become even more impressive thanks to their recent purchase of Bethesda. Another amazing discovery during a recent Black Friday Sale was just how extensive the Xbox 360 library is allowing me to finally get access to some older titles like Metal Gear Solid 3 and Silent Hill 2 that I was worried I had missed my opportunity to play short of new remasters coming out some day.

It’s well known that the Series S will top off at 1440p instead of 4K and won’t necessarily be able to support as high of frame rates as the Series X, but, for my gaming purposes, this shouldn’t be an issue. Really the only major performance improvement I can speak of so far has been the brilliant Game Resume feature that let’s you have multiple games going at once, allowing you to quickly switch between them (unlike the PS5 which closes out any games that are open when you start a new one). This feature makes sure that it’s never more than a few seconds from when I boot up my Xbox to when I’m in game.

Would I Recommend It?

If you’re planning to have just a single console for your gaming, then this one probably isn’t the way to go. While it is the cheapest option at $200 less than the Xbox Series X and the PS5, it’s also the least powerful, and the differences between it and the X will likely become more obvious as the generation matures and games get more taxing on these architectures. If, however, you’re looking for a secondary system, something a little more wallet-friendly, or just want a wonderful Game Pass machine, this adorable little console is a tremendous addition to any gaming family. The feeling it elicits in me is reminiscent of the power the Nintendo Switch holds over me. It’s a charming little console that may not be the most powerful, but it gives me access to so many good games and is just plain fun to use.

I hope this helps you in your journey toward joining the latest generation of incredible gaming. Now if you’ll excuse me, I have far too many games to play.