For the past 5 years, I’ve heard plenty about the brilliance of FromSoftware’s masochistic action RPG, Bloodborne. At first, it didn’t seem like something that’d appeal to me. I mean I enjoy relaxing with video games not using them to subject myself to punishment. Plus, they don’t even have maps, and I get stressed out when I have no idea where I’m going (just ask my wife on any car ride more than 5 minutes from our house). Eventually, when Bloodborne was offered as the free game of the month for Playstation Plus in March 2018, I decided to give it a shot. After all, it was free, so what could the harm be? Having never played a Dark Souls game before, I was immediately lost, and gave up less than 20 minutes in.

Thus began a yearly ritual where I would attempt to finally get into the game that was so highly regarded by all. When 2019 rolled around, it seemed like the perfect time to count myself among the game’s faithful following. I had just completed an epic run through Dark Souls, and now would actually know what the hell was going on. Unfortunately, by a sheer combination of burnout from dying a bunch in its predecessor and being shocked to discover that my Souls skills did not translate into Bloodborne success, I gave up after 50 or so unceremonious deaths.

Another year passed and plenty of additional platitudes about this highly exalted game were heard. With a decent lull in the game release schedule until April, it seemed like as good of a time as any to try again. Just like before, I quickly died, a lot. After about three hours of seemingly futile attempts against the game’s first over-sized boss, the Cleric Beast, I finally surpassed my previous best progress in this game, and felt oddly inspired by those 30 or so deaths. Suddenly, I was speaking the same language as this far more polished, Lovecraft-ian take on a Souls game. The amped up levels of speed and brutality were clicking, and I was beginning to understand the delicate balance between patience and aggression that had to be maintained to survive.  I was finally getting good at Bloodborne, and there’d be no stopping me ending the nightmare this year.

The true highlight of any FromSoftware game is its massive and crushing boss battles. With each passing boss, I found myself more and more absorbed in the game’s intoxicating cycle of death and learning. There’s an unbelievable sense of accomplishment that comes from finally adapting to a boss’s patterns and besting them after they’ve taken so many lives from you that makes the hours of building yourself up and cursing the nightmare of Yharnam worth it. To fully experience the best and most brutal this game has to offer, be sure to download The Old Hunters DLC, which features some of the best and most difficult boss offerings in the game.

Of the 22 bosses (main game + The Old Hunters DLC), here are my top 10 as decided by a combination of how uniquely they’re designed, how brutally difficult they are, and how much fun I had dying repeatedly. Also, be sure to check out my similar list for Dark Souls if you’re a fan of all things FromSoftware. 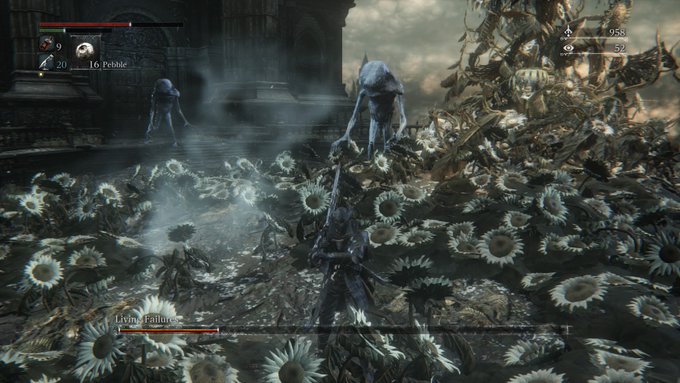 While pretty much every other aspect of the DLC hits harder than the main game, this third boss is perhaps the most middling and uninspired of all of FromSoftware’s creations. It seems like a ripped off version of the also underwhelming Celestial Emissary boss found in the main game, except there’s almost no real strategy to the fight as its just running around and attacking any of the multiple creatures on screen who, for some reason, share a collective health bar. Fortunately, the bad taste doesn’t last long, as this battle is quickly followed by one of the best in the game in Lady Maria (more on her later).

Depending on how you tackle the ending, Gehrman can either be not encountered at all, your final boss, or the penultimate foe. Following dozens of hours of seeking out Gehrman’s wisdom to help with your hunt, having to face off against him is a welcome treat. Seeing the seemingly paralyzed foe rise from his wheelchair and prove to be your equal is a fun, fitting end to your time in the nightmare.

The amygdala species is one of the most fascinating in the entire game. About halfway through the hunt (or much sooner if you are unlucky enough to stumble upon one while invisible to the non-insightful human eye), you discover that Yharnam is teeming with giant creatures draped over the major buildings just waiting to get you within their grasps. While these lesser amygdalas aren’t able to be fought, you do get to try your hand at an amygdala in one of the optional areas of the game, and it does not disappoint. This massive baddie not only nullifies the typical large beast strategy of attacking them low by having seemingly impervious legs, it also achieves new frenzied heights by ripping several of its own arms off just to have something to swing at you and make it all the more deadly. 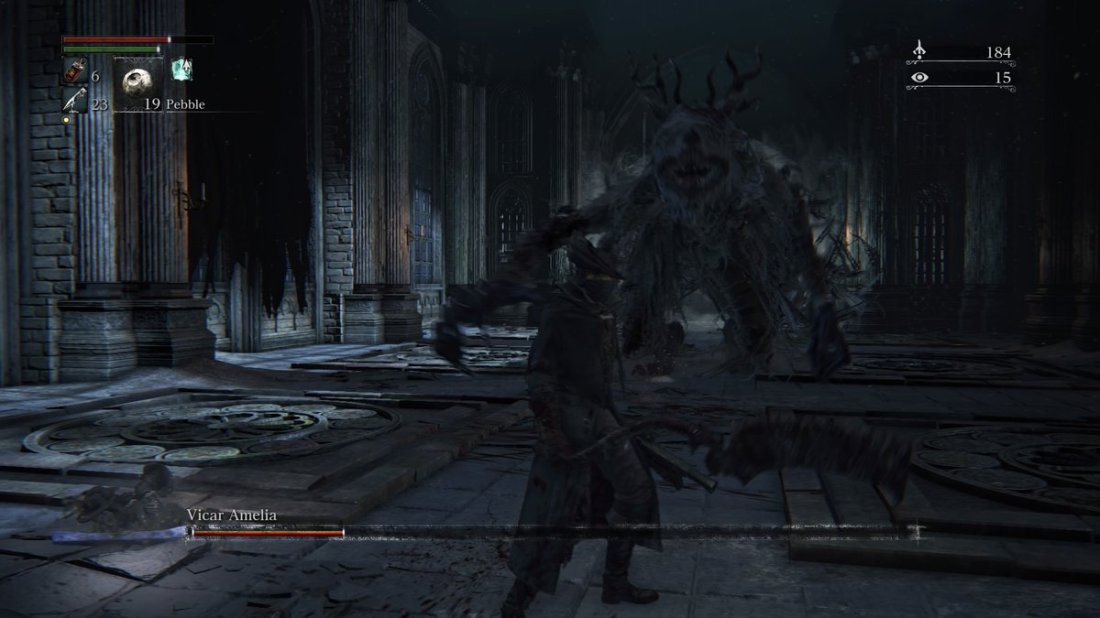 Prior to encountering the yeti-like Vicar Amelia, I was starting to worry that I had become too overpowered and wasn’t going to fully enjoy Bloodborne. Then, she repeatedly put me in my place. The confined chapel setting and her terrifying reach were a clear signal that the game was entering a new phase of mayhem, and the enveloping darkness of the night that followed confirmed it.

Of all the multi-character boss battles, this one plays out the coolest (think the exact opposite of the Living Failures), featuring 3 equally vicious foes and demanding smart use of environmental obstacles to keep from being overwhelmed. Just when you think you’ve gotten accustomed to balancing each of the baddies, they transform halfway through the battle adding an entire new level of insanity to the proceedings.

His name alone earns this arachnid a place on the list. The battle itself has a dreamlike quality to it above a mythical lake that spans throughout the horizon. Balancing avoiding his many spider minions with timing just enough attacks to avoid meteor-based retribution is a delicate and fun tightrope to walk making for one of the more memorable main game encounters. 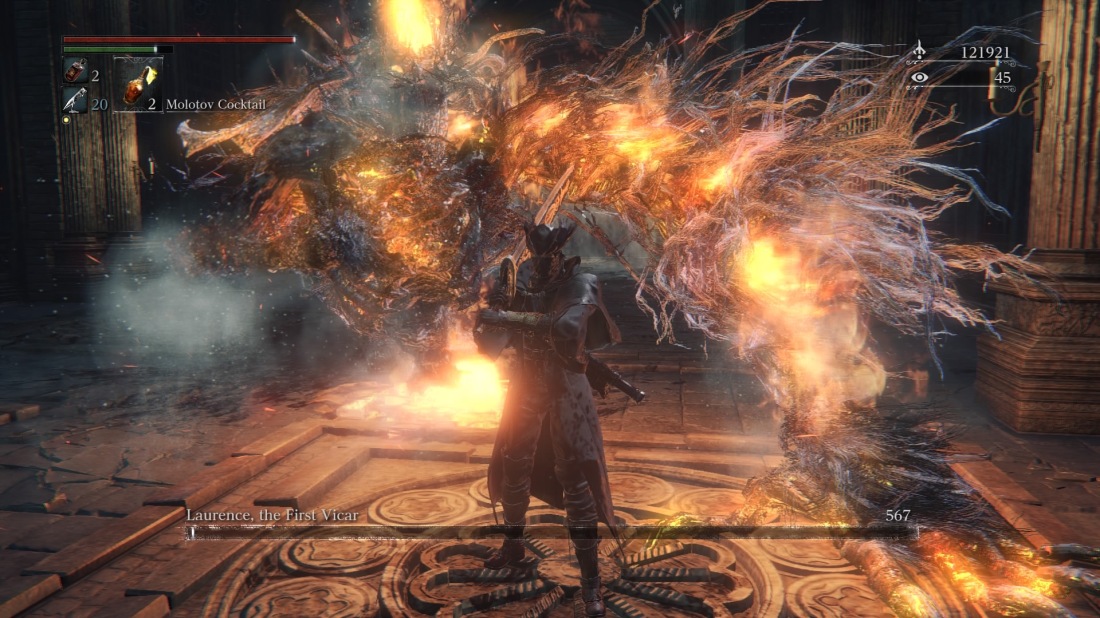 Take all the carnage of the game’s first boss, the Cleric Beast, and add a dash of fire and an extra serving or two of aggression, and you get Laurence. Even prior to the battle beginning, the holy grail-like quest involving eyeballs, secret elevators, and hidden altars to uncover this boss was a memorable enough journey to earn him a spot. 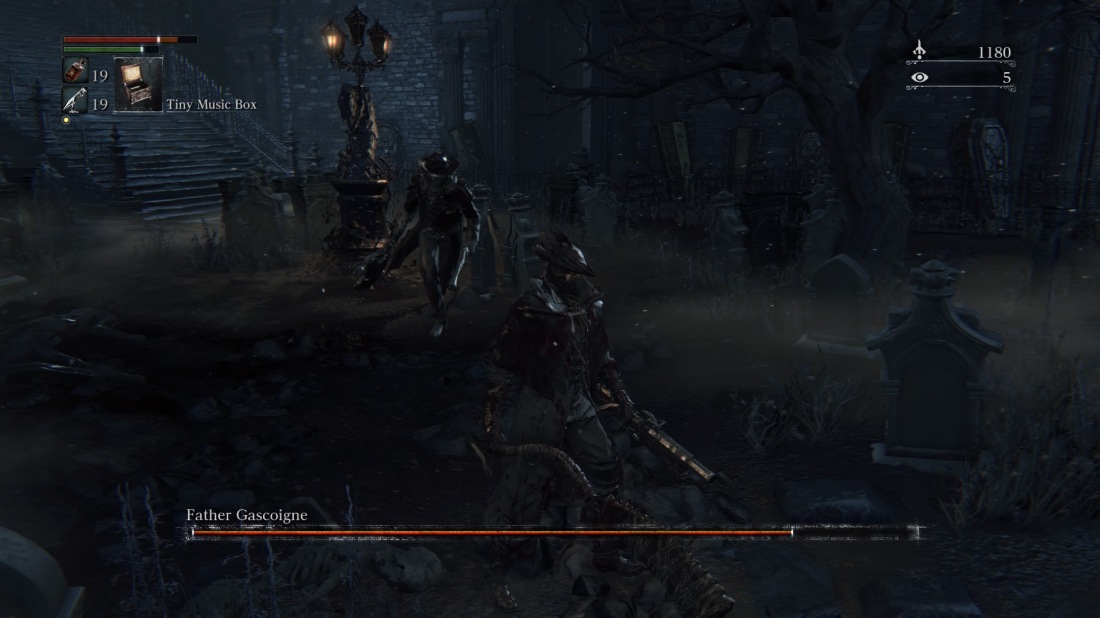 This first real encounter with a fellow hunter is instantly memorable. The speed and mobility possessed by this boss that essentially has your same skill set are a sight to behold. Additionally, the lore behind him including receiving a music box from his concerned daughter that will temporarily stun him adds a wonderful layer to the tragic encounter. This is also the first instance of seeing a boss transform, as midway through the battle, Father G takes on a very werewolf-like form that ratchets up the intensity immensely. While it was once safe to hide behind tombstones, they suddenly provides no quarry as the increased power of the beast easily reduces them to rubble. In many ways, this is the measuring stick that determines the hunters from the hunted.

4) Ludwig the Accursed/ the Holy Blade 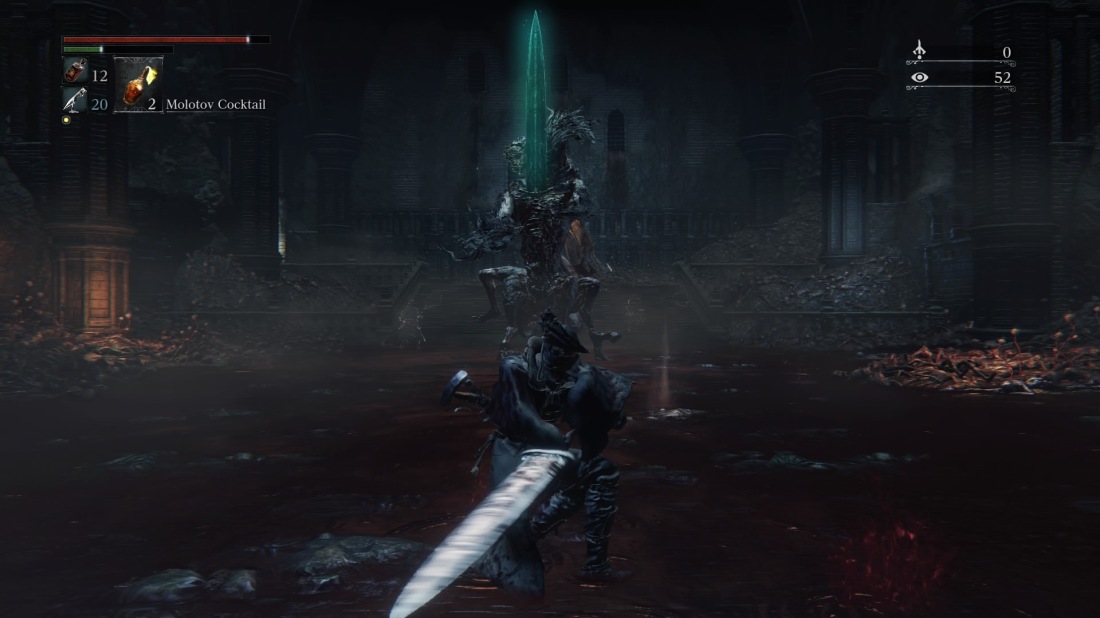 Having spent the past dozen or so hours wielding the powerful and versatile Ludwig’s Holy Blade as my main melee weapon, I was excited to meet the man behind the myth, and he most certainly lived up to his reputation. Yet another two-phase boss, the first phase is a powerful beast with exceptionally long range that requires maintaining a distance, while the second phase finds our fallen hero suddenly wielding a massive blade that will destroy you in milliseconds if you can’t find a way to get in close to subdue its fatal swipes. After many deaths, the doomed story of the Holy Church hunter turned beast comes to a poignant close as you have to choose between telling Ludwig that the Church has failed or lying to him, so he can die at peace. I just didn’t have the heart to sully his final weirdly beautiful moments. In the end, this encounter serves notice that The Old Hunters DLC is not here to mess around.

All the skills of a hunter combined with devastating magic attacks leads to one of the most frantic fights that keeps you constantly on your toes, never feeling even a modicum of safety. The devastating range of both his spells and his swing are the best there is in the main game. And the payoff for winning this epic duel is a magical crown that reveals a hidden, long exiled queen of the vilebloods and a chance to oppose the corrupt church.

2) The Orphan of Kos

No boss exacted anywhere close to as many deaths upon me as The Orphan of Kos did. Aside from being visually among the most grim bosses around, the audio really stands out as the shriek he unleashes is forever etched in my brain and makes me cringe just thinking about it. To compliment his terrifying presence, this final boss of the DLC has the most varied and difficult to distinguish range of attacks. No gap between you and this beast feels safe, and one misstep can quickly lead to your doom. I must have alternated between a good 5+ different approaches to the fight before finally settling on the inevitable winning combination of visceral attacks, juggling the boss with parries, and relying on sheer luck to somehow survive the uncut chaos of his second form.

1) Lady Maria of the Astral Clocktower

Pure kinetic energy is the best way to describe my favorite boss battle of both the DLC and the game as a whole. A clever little design thing happens here where, for the only time in the game, there’s a lamp right outside the encounter arena, meaning you are essentially instantaneously back in the fight upon revival, which further solidifies the explosively fast nature of the battle. Lady Maria’s Rakuyo is one of the more interesting weapons in the game, and its transformation from double blades, to dual-sided bow, to blood-shooting tentacles, to finally a fire-engulfed smiter of foes is simply exhilarating. This is the most punishing test of side-stepping in the game as her attacks come at you so quickly and precisely that the constant shifting is required (and quite disorienting). While Lady Maria may be a smidge less difficult than the number two entry on this list, the balletic dance required to beat her was by far the most fun I had facing off against any boss, which earns her the number one spot.

Over 57 hours, 22 (mostly) epic boss battles, and 1000s of deaths later, my time in Yharnam has finally come to an end (at least until I get brave enough to try the far more difficult New Game Plus). Now, once I have had a long enough break from the anguish and enchantment of seemingly endless deaths, I can at last complete the FromSoftware trifecta and begin the cycle of learning through dying all over again with 2019’s Sekiro and all of its surely remarkable bosses.

5 thoughts on “If at First You Don’t Succeed, Dust Yourself off, and Die Again: The Top 10 Bosses in Bloodborne”